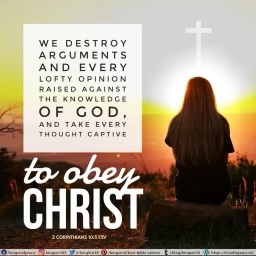 2 Corinthians 10:5 – The Apostle Paul when he is speaking of our spiritual warfare, he says that we take every thought captive and subject all thinking to Christ Jesus. He says that we demolish arguments and every pretension that sets itself up against the knowledge of God, and we take captive every thought to make it obedient to Christ”

The point in this section of 2 Corinthians is that we are in a spiritual warfare. Paul leads up to the statement that we take every thought captive is important. In verse 3 Paul states that though we walk in the flesh we do not war after the flesh. That is, we do not rely on human ingenuity or manmade plans to bring the victory. The flesh is powerless against the wiles of the devil. In verse 4 Paul mentions the “strongholds” or the “fortresses” that are destroyed by God’s power. These strongholds are the philosophies, arguments, and “proud opinions” mentioned in verse 5.

Obviously there are many human thoughts that need to be taken captive. Lotsa ungodly philosophies hold people in bondage, and those spiritual “fortresses” need to be demolished. The systems of thought that war against us are “arrogant lofty opinions” (ESV), and “sophisticated arguments and every exalted and proud thing” (AMP) that prevent people from knowing God. In our day, these systems of human thought include the theory of evolution, secular humanism, existentialism, the cults, the occult, and false religions. How many people are held captive by the idea that they are the products of chance in a godless universe? How many spiritual prisoners labor under the requirements of Religion.
We must take captive every thought and make it obedient to Christ. “If the Son sets you free, you will be free indeed” (John 8:36).

False religion and secular philosophy have created thinking that has imprisoned the minds of millions. It is a true spiritual battle: “The god of this age has blinded the minds of unbelievers, so that they cannot see the light of the gospel that displays the glory of Christ, who is the image of God” (2 Corinthians 4:4). Any idea, opinion, or worldview that states that Christ is unnecessary is an example of the devil’s pride. Such thoughts must be taken captive and made obedient to Christ. Those who know the truth must confront error with the weapon we’ve been given, the sword of the Spirit, which is the Word of God (Ephesians 6:17).

Our weapons in the spiritual battle are not carnal but mighty through God. As we are transformed by the renewing of our minds (Romans 12:2), we engage the battle against pretense and arrogant philosophy in the world. Trusting Christ and rightly dividing the Word of God (2 Timothy 2:15), we take every thought captive, pull down the strongholds, and, by the grace of God, set the captives free.
Lord help me today not to incline my thinking to worldly thinking or will, to the enemies lies and will, or even to leaning on my own understanding or will but to lean in and incline to your Wisdom in Your Word.
Thank You Jesus for Your Truth and your plan for my life which is a good plan not to harm me but a future and a hope!